An Odyssey of Creativity by Seven Army Officers’ Wives: Srjanā 22 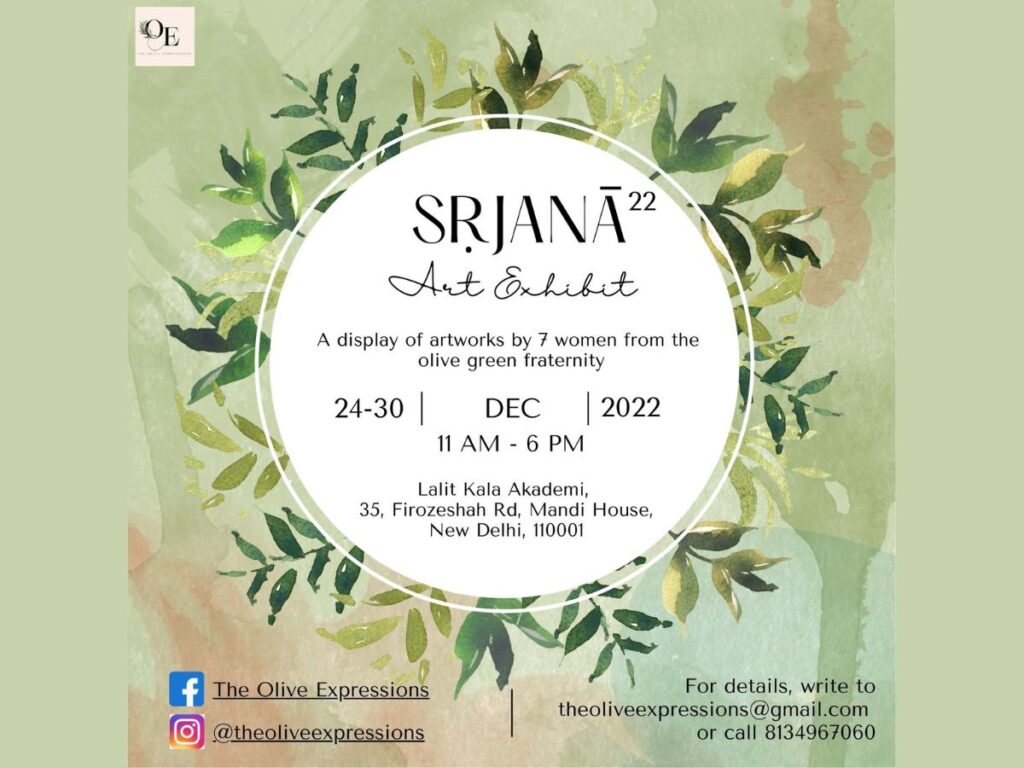 New Delhi (India), December 21: ‘Srjanā 22’, is first of its kind art exhibition where seven selected artists, who are army officers wives, would be displaying their art works at the prestigious Lalit Kala Akademi, New Delhi from 24 to 30 December 2022.

Col. Rajyavardhan Singh Rathore, AVSM, Member of Parliament, Olympic medalist and Arjuna Awardee will be the Chief Guest for the inauguration of the exhibition on 24 December. The entry to the exhibition on all days is free and open to all.

The exhibition showcases art works which are an interpretation of the artists’ creative journey.

The uniqueness about the show ‘Srjanā 22’ is that though each artist belongs to a different state of India what bonds them together is their love for art and the army fraternity where they thrive in the spirit of patriotism and camaraderie.

The group show includes the works of Vaishali Singh, Shinei Sharma, Neelima Dayal, Monika Saroch, Laishram Jenny, Anisha Kotibhaskar and Namita Minotra who are proficient in different mediums and have had the privilege to showcase their works in eminent art galleries in India as well abroad, in the past.

Vaishali Singh, in her series, ‘Vignettes in Stone’, through her vibrant brush strokes showcases the enchanting beauty of lesser known stone marvels of antiquity, chiseled by unknown artists of the past.

Shinei Sharma works both in oil and acrylic. In her own words, “The lines in my paintings are seeking to connect the layers and fragments as everything that exists is not whole in itself, it consists of layers of whatever it undergoes, be it creation, existence or consciousness.”

Neelima Dayal’s series “The Ethereal Equine” has utilized the captivating, geometric patterns of the zentangle art form and water colours to intricately represent an animal of seemingly ethereal origins. In this series she has tried to represent horses across myth, mythology and folklore.

Monika Saroch’s works capture the spirit of calmness and freedom. Through her series “Azure” she plays with different hues of blues to express herself beautifully through her lucid water colour washes.

Laishram Jenny’s series is Koina Paibi Leirang. It’s a first part series in watercolors telling the story of a woman from Manipur who wants to explore the world.

Anisha Kotibhaskar, with her bold use of knife, brings to life the vibrant hues of the markets of India, through a series titled ‘The Markets’. Her artworks fuse the energy, moods, and purpose of the market through the day, across places.

Namita Minotra is a watercolorist with an artistic euphoria who loves to experiment with the medium and in her series, “Sundari”, which would be on display, she has played with water colours on wood along with an interweave of pyrography and copper stapling.

Apart from the art works, the exhibition would be hosting some eminent artists for art interaction. Demonstrations by the participating artists would also be held, giving a glimpse of their style of painting.