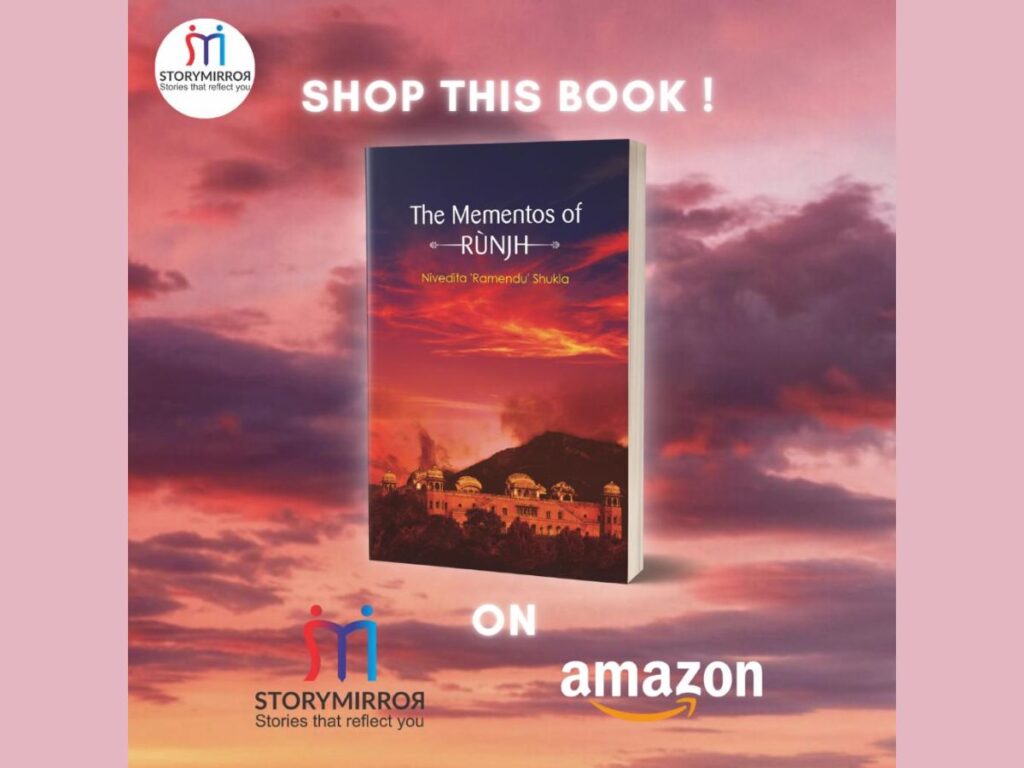 New Delhi (India), January 6: Captivating is the right adjective for those stories that get our undivided attention and make us re-read them several times. Such a remarkable read has been newly launched recently, entitled ‘The Mementos of Runjh’. This spectacular story carved by author Nivedita ‘Ramendu’ Shukla has paved the way to establishing itself as a bestseller already. Published by StoryMirror, the book’s object of virtues, charms and mystical build-up of the plot enables the reader to explore more.

The artistry of the writer, her depth in juggling various literary terms, and her expertise in rhetorics are well depicted on every page and every line of this awe-inspiring narrative. As an Arts honors, author Nivedita ‘Ramendu’ Shukla shows her skillful work and crafts with words in describing the room and the stories carved on its walls. The characters defined here leave a surprise for the reader. The indecipherable writings on each wall make an image of a grown man and these scribbles tell what has been left untold.

The reader is amazed to observe various elements of revelation in ‘The Mementos of Runjh’. Author Nivedita ‘Ramendu’ Shukla is fond of such themes herself and thus, she bestows the readers with a splendid tale like this. Her love for literature is demonstrated well in each of her expressions given in the book.

As a storyteller, the writer excels in making the readers understand the indiscernible things in the book. She gives hints and clues at the right moment to guide the peruser through the whole read to reach the climax. That makes the edition intelligible for everyone.

The title ‘The Mementos of Runjh’ is an allusion itself and it is enough to attract the readers. Even those who don’t care much for mysteries and thrilling tales will find this book amazing. Not an extravaganza but the story promises to be set on the right track that takes the reader on a ride of flabbergasting fun, thrill, and mystique.

The myriad of scribbled writings indicates the mementos, thus making the title of the edition impeccable and correct. The book conveys so much thrill to the reader that one does not want to miss its climax. ‘The Mementos of Runjh’ is an intriguing tale that not only satisfies the longing for suspense but also it goes the extra mile to make it an encore for those who read it.

‘The Mementos of Runjh’ by author Nivedita ‘Ramendu’ Shukla consists of astounding secrets and unknown tales and autobiographies of its characters. They tell their tales through that myriad of scribblings. The walls play a vital role in this juncture. They speak of the hidden disquietude. The secrets of Runjh are carved on these walls. Though indecipherable, they have an ocean of concealed facts scribbled on that utter much about that dynasty.

The story of ‘The Mementos of Runjh’ centers around the particular dynasty that contains so much of mysteries. The author who has studied both Arts and Software Engineering has great knowledge and imagination for creating such awesome tales. Her expertise in literature is shown in her book ‘The Mementos of Runjh’. The reader finds all the characters and fundamental elements that make up the plot of the tale fascinating. It is well justified that the author’s love for exploration is shown in her book as well.

The readers go on a staggering journey as they go through each event written in this book. There is no doubt the newly released edition is winning hearts everywhere already. Author Nivedita ‘Ramendu’ Shukla has given book lovers a marvelously crafted tale that quenches the thirst for suspense, mystery, and a stupefying climax.

The feedbacks, reviews, and remarks for ‘The Mementos of Runjh’ are full of appreciation and praise for the storyline. The writer has added the right amount of literary elements and traits in making the book attractive and solid. Her artistic thinking, the play of words, and her portrayal of the astounding characters make the story remarkable and acceptable to all kinds of readers.

To sum it up, ‘The Mementos of Runjh’ is a wholesome, well-woven story for readers of diverse tastes as it has all the fundamentals one needs and wants to read. That is why it is very well received by the perusers. Readers owe it to the author for making their journey with this book so wonderful. In conclusion, we may say that this book of mysteries and suspense introduced by StoryMirror is ruling the top shelf of bestselling books.

Jan 6, 2023Leave a Comment on The Mementos of Runjh – A Newly Launched Tale With The Lingering MystiqueBusiness
Tags Business